Uganda wins big at the EAC games in Juba

Spina Bifida Cause and prevention

Seven people were killed in deadly clashes between the Armed Forces of the Democratic Republic of the Congo-FARDC and the rebel Allied Democratic Forces (ADF) in Irumu territory in Ituri province on Saturday.

A reliable security source told our reporter on condition of anonymity on Monday that the new attack by ADF rebels occurred at Masome village in irumu territory.  The source explains the dead included two rebels and the vice president of a traders’ Cooperative in Irumu territory based in Komanda shopping center.

The source says that many inhabitants of Komanda, Makayanga, and their outskirts involved agricultural activities in Masome, located about 10kilometers in the bush on the Komanda-Bunia axis were thrown into panic by the gunfire exchange between the rebels and government army.

Daniel Herabo, the president of the Komanda civil society in the area, says that the rebels also torched two motorcycles and some homes before the government army pursued them. Meanwhile, at least 1,700 Uganda Peoples Défense Forces (UPDF) soldiers are already in Eastern Democratic of Congo for a joint operation with FARDC against the ADF, according to a security source in DR Congo.

The Ugandan troops comprise officers from the special forces and infantry. The source also says that they will have the support of the military aviation of the Ugandan army during the offensives against the ADF.  Under the command of Major General Kayanja Muhanga, the UPDF troops have set up their forward operating base in Mukakati, a village in the Watalinga sector and the final adjustments are underway before the assault on all ADF positions in North Kivu and Ituri.

As for the FARDC, two scenarios are being studied: the merger of the Sokola 1 operational sector of North Kivu with that of Ituri or the establishment of single FARDC operations command cell for these two provinces affected by ADF attacks. It is this cell that could interact in the joint FARDC-UPDF coordination in the operations against the ADF in Beni and Dugué. 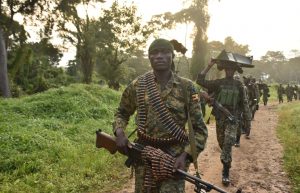 This would imply the designation of new FARDC commanders in the region, sources specify. General, Gilbert Kabanda, the Congolese Minister of National Defense arrived in Beni over the weekend and is still camping there.

Early last week, UPDF and the DRC forces launched a joint operation code-named “Military Suja (Hero), against ADF militants in neighboring Congo, an offensive that Ugandan officials said was intended to drive the militants out of their bases.

Maj. Peter Mugisa, the spokesperson for Operation Suja however said that UPDF trucks and other heavy equipment are stuck due to the bad terrain and rain. He revealed that they were set to receive loaders and graders to clear the route so that they can advance towards the enemy lines estimated to be 20 kilometers from Mukakati.