The decision arises from two consolidated appeals filed by the Electoral Commission and the Attorney General and another from six members of Parliament who were then elected to represent people in newly created constituencies in elections held in 2018.

URN. The Supreme Court has upheld the decision of the Constitutional Court banning midterm elections on grounds that it is illegal.

This was in a majority decision of five Justices against two delivered on Thursday by the Supreme Court Registrar Harriet Ssali Lukwago on behalf of the majority Justices Mike Chibita, Percy Night Tuhaise, Ezekiel Muhanguzi, Paul Mugamba, and Faith Mwondha.

The decision arises from two consolidated appeals filed by the Electoral Commission and the Attorney General and another from six members of Parliament who were then elected to represent people in newly created constituencies in elections held in 2018. 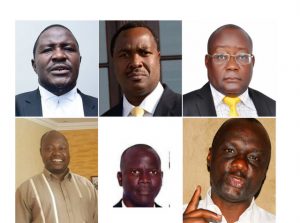 After the creation of the municipalities, the Bufumbiro East MP Eddie Kwizera petitioned the Constitutional Court challenging the legality of the process leading to their creation.

Kwizera argued that the parliamentary decision dated August 9th, 2016 dividing Uganda into 296  constituencies was in contravention of the constitution because the Electoral Commission had not properly demarcated their boundaries as required in the law.

He also noted that the holding of elections that are neither residual nor by-election or a general election was also unconstitutional.

Kwizera accordingly asked the Constitutional Court to quash the Parliamentary resolution and declare the elections in the said municipalities as illegal and also to declare the seats of the legislators who were representing them as vacant.

In their judgment, the Constitutional Court Justices led by the then Deputy Chief Justice Alfonse Owiny-Dollo’s agreed with Kwizera and threw out the MPs arguing that their constituencies were created after the 2016 general elections.

As such, the Constitutional Court Justice Christopher Madrama who wrote the court’s decision accordingly declared the seats of the six MPs, non-existent, vacant, and therefore illegal.

The Electoral Commission was then ordered to within one-year file before the Constitutional Court evidence of the prescription of Parliament of the number of constituencies in Uganda for the next general elections and also to provide evidence of their demarcation within ten months after the court decision.

The Electoral Commission and government were also ordered to pay half of the taxed costs to Kwizera the Petitioner and the six legislators were ordered to vacate Parliament immediately since they had been elected in nonexistent positions.

However, the Electoral Commission and the Attorney General appealed against the ruling in the Supreme Court.

After the decision was made, the six legislators were not a party to the initial petition of Kwizera and they also filed an appeal arguing that they were not represented and their right to be heard was violated. This the MPs said they were being dismissed from parliament when they reportedly didn’t know about the proceedings so as to ably defend themselves.

In their Judgement, the Majority Supreme Court Justices have upheld the Constitutional Court decision saying that it was very clear because the constitution enables Parliament to prescribe the number of constituencies Uganda shall be divided into.

“…the next step that would involve the Electoral Commission is demarcating constituencies and the considerations that each county as prescribed by Parliament has at least one member of Parliament and no constituency falls within more than one county,” reads the judgment in part.

Adding that ” there is no evidence on record to show that the Electoral Commission ever undertook to demarcate constituencies based on the resolution of Parliament dated August 9th 2016”. According to the Justices, this, therefore, meant that the process of creation of constituencies as prescribed in the Constitution was never completed.

“In view of this, the Electoral Commission could not be seen to organize elections in purported constituencies whose demarcation and creation had not been completed in law.

The Justices have also confirmed that article 83 of the Constitution is very clear on the circumstances under which a seat can fall vacant.

According to the article, a seat can fall vacant if the current legislator resigns his or her office in writing signed by him or her and addressed to bathe speaker, is absent for 15 parliamentary sittings continuously, and is unable to offer a satisfactory explanation for his or her absence, when found guilty, recalled by voters among other reasons. But this the Supreme Court says was not the case in the election of MP Basalirwa and his colleagues.

Accordingly, the Court has dismissed the consolidated appeals and ordered that the government, Electoral Commission, and the aforementioned legislators some of which have since lost the bid to return to Parliament to pay costs to Kwizera.

The Electoral Commission Lawyer Eric Sabiiti about the decision said that for over 20 years, the Commission has been conducting elections with guidance from a number of court decisions and that this will equally be implemented.

Aubameyang tests positive for COVID 19 after partying in Dubai

Aubameyang tests positive for COVID 19 after partying in Dubai

ADVERTISEMENT
No Result
View All Result